From the moment I found out I was pregnant Lael was completely on board.

She rubbed my belly, fetched things for me and grabbed baby things whenever we went to the store.

When Kobi was born she was first to hold him after me and daddy. She has helped wash him, clothe him, entertain him, push him in the stroller and even feed him.

I have done everything in my power to keep her as involved as possible. Being home with them made it easy for me to balance between the two.

But then I went back to work.

At first I didn't notice a change.

It could be because I was so worried about pumping enough breast milk I didn’t take time to notice the little signs.

The first sign was her wanted to sleep in the bed with me again.

This has always been one of those “things” we’ve struggled with. I allowed her but made her sleep on the other side of me as to not roll on the baby (even though I use a co-sleeper).

The next incident was her randomly crying about random things. When I asked her what was wrong she told me she didn’t want our house to burn down.

A few days later we all went to Kobi’s doctor’s appointment and once we left to get lunch she broke down in the back of the car but could give us no reason.

A few days later the same but this time we were with her grandmother.

She then finally opened up.

“Mommy doesn’t talk to me only Kobi and Daddy doesn’t play with me just Kobi and all he does it tell me to hush while Kobi is sleeping.”

I think I heard my heart actually shatter into tiny little pieces.

This is the whole reason I questioned having another child. Because I didn’t want to put her through THIS.

I don’t want her to ever feel as if she’s on the back burner. I know that change has to happen in her life but I didn’t want it to be too drastic.

I guess that’s asking too much.

I try to put the baby to sleep and then just focus on her. Whether it’s watching her favorite show with her or just listening to her tell me a crazy story.

But is it enough. I’m afraid of what I may be doing to her. It’s always just been the two of us and now I’ve added another child.

It’s totally my fault and now I’m trying to balance the two.

Email ThisBlogThis!Share to TwitterShare to FacebookShare to Pinterest
Labels: Family, Life, My Child

In Which I Talk About My Boobs

I know I said I would be back the last 2 posts. And I'm trying. I really am.

I compose posts in my head everyday but it's the sitting down and typing them out part that's hard.

I get to go home for lunch everyday and cuddle with the baby and that is awesome too.

But let me tell you what isn't awesome.

Having to leave my baby.

The fact that I was nursing and would now have to pump more often than not was really getting to me.

I have to admit though, my new office knew I was just getting off of maternity leave and had an empty office set up for me to pump in.

They even made me a "Do Not Disturb" sign and had a door jammer so that I wouldn't be walked in on by mistake.

Even with all that said, I will never forget my first day pumping at work.

I took my insulated bag including the pump and empty milk storage bags and walked down the hallway.

I opened the door and looked around. There sat an unoccupied desk, an unused filing cabinet, and a table with two empty chairs surrounding it.

Behind the desk there are windows but you can't see outside because the curtains are pinned closed for security reasons.

I sat my bag down and just stood in the middle of the room for a second.

Finally, I sat down at the table and took off my top.

I hooked myself up to the pump and waited.

I don't know how long I sat there before I realized my pants were getting wet.

I thought maybe I was leaking. I took a look and sure enough I was.

Only I wasn't leaking milk. I was crying.

I didn't even realize I was crying.

Here I was sitting in and empty office pumping milk instead of being home nursing my baby.

I didn't think I could do it but I did. I pumped like the best of them and when 11:30 came around I almost ran people off the road driving home to nurse him during my lunch hour.

I cried then too. This time knowingly. I knew it would be hard but I had no idea it would have been THAT hard.

Since then I've been pumping at work twice a day. Nursing him everyday during lunch and in the evenings.

My hubby informed me that Kobi was now drinking two bags in one feeding. I thought I would just pump more but my body didn't get that memo.

Slowly I've been watching the freezer supply diminish while I've been walking around with raw nipples trying to get every last drop of liquid gold out that I could.

Then yesterday it happened.

I ran out of milk. Both in the freezer and in my breasts.

He emptied them. But yet he continued to scream.

So I did what any other mother would have done.

I gave him formula.

I don't know why I took it so hard. I felt as if I had already left him to go back to work but now I wasn't even able to feed him properly.

Don't give me a pep talk because I already know I'm being crazy but it's how I felt.

He finished that formula and then looked up at me and smiled. A smile so big that milk ran out of the side of his mouth.

How could I not be happy with my decision.

I've still not given up. I nursed him in the middle of the night, this morning and again at lunch. I just might need a little extra help from the formula until my milk catches up.

I am not fully OK with this but I'm pressing forward just the same.

Thank you for all those on Twitter who gave me words of encouragement and all kinds of tricks to try. I have drank beer, power-pumped, pumped in the shower, eaten oatmeal, and had expressed.

I will continue to fight the good fight until my boobs scream uncle. 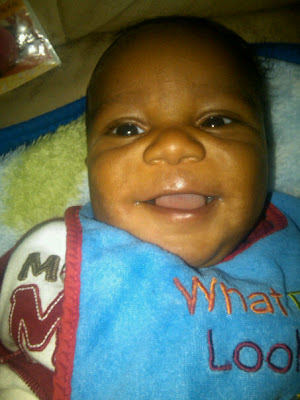 Because seriously. He's totally worth it.