All I Need Is A Frame 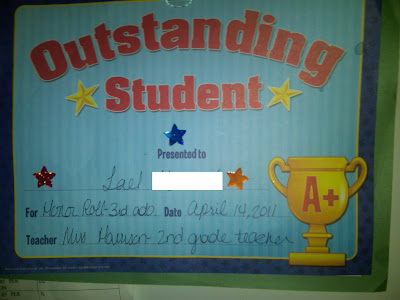 ﻿
All the hard work has finally paid off.  I was so proud that I burst into tears.  As long as I've had this blog I've talked about the report cards that broke my heart.

But she did it.

She kicked the 3rd advisory period's ass.  I'm so proud of her.  Now that she has a taste of the Honor Roll she wants to keep it up.

Email ThisBlogThis!Share to TwitterShare to FacebookShare to Pinterest
Labels: Motherhood, My Child, School

So here we are Kobi. Counting down to your first birthday.

You are such a big boy. There are so many new things to touch on. You've graduated from your infant car seat. Today you had your first ride in big boy style. I think you kind of dug it.

You have finally grasped the concept of the sippy cup. I knew you could. You just don't like being rushed into things.

You can stand on your own now. Yes, you can but you are really quite lazy and don't stand longer than necessary. You're such a tease.

Baby food is pretty much a thing of the past. You refuse to eat anything but the real thing. You also do this thing were I put food in your mouth and you take it out, look at it and then decide if you want it. Silly boy.

You love repeating me. When I say cheese you give the goofiest grin and say "sheeee". You pretty much have Mama and Dada down but use them only when necessary.

I am planning your first birthday. My heart aches just a bit but it swells more with pride. I still can't believe I have a son. My boy. Mama's baby.

I took you to the park today do a photoshoot. You climbed and crawled and enjoyed the sun on your face. We were alone for a while but then a mom came with her two kids. She had an older daughter and a boy maybe a little over a year. You were sitting and across from them staring. She was one of those cute moms. You know the kind that look like they never had kids. I stared wishing I had that body. Before I knew it you power crawled over to her and she helped you stand up. Then. You slapped her.

I pretended to be mortified and she laughed it off. But when she wasn't looking I totally high fived you. We are have lots of adventures ahead of us my boy. Happy 11 months! 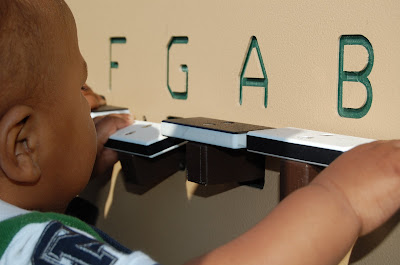 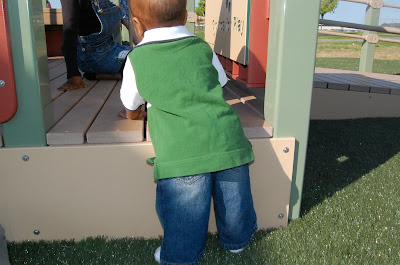 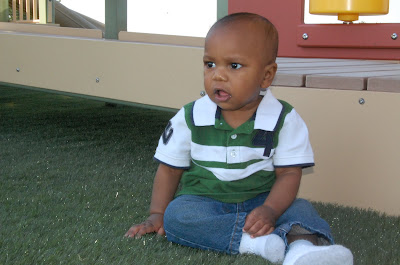 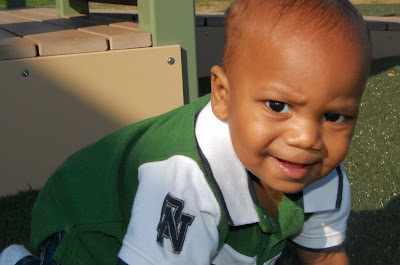 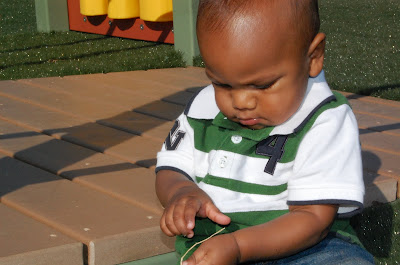 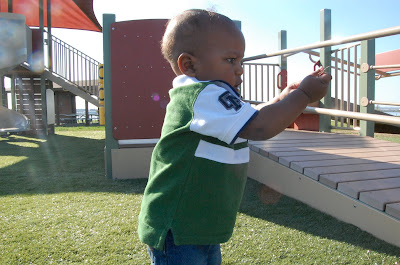 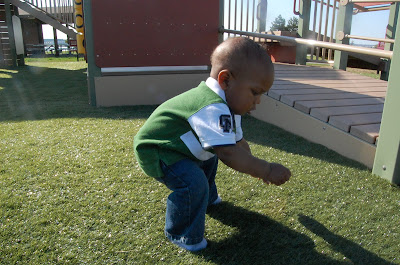 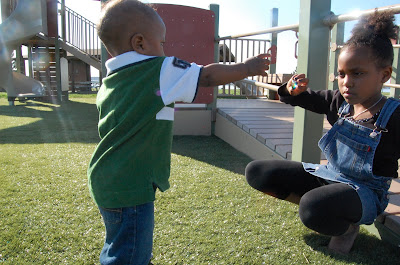 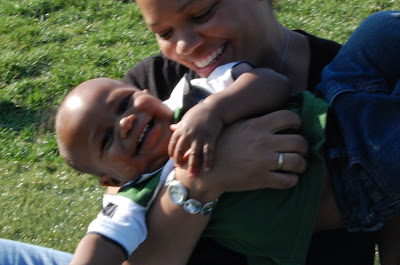 Email ThisBlogThis!Share to TwitterShare to FacebookShare to Pinterest
Labels: Motherhood, My Child

I don’t think I posted here about it but I’m sure I tweeted about Kobi’s “thing”. So, for the past few months he does this head tilt. He leans his head to the right and lifts his right should up simultaneously. All day at random times. At first we thought it was just something cute but we then decided it was something weird. He was do it his highchair, when we’re holding him, when he’s playing, etc. No specific time of day or during a certain act. We tried not to make a big deal about it but continued to watch him closely.

When I took him in for his 9 month checkup, we brought it up to his Pediatrician. Right when we were explaining it, he proceeded to show her himself. Quite a few times actually. She took notice of it. She checked his ears and they were clear. No ear infection. She checked his eyes and they seemed fine as well. She told us not to get worked up about it but to keep an eye on it.

No sooner that I had got back to work later that day, I had an email from her. I guess it bothered her enough that she asked a few colleagues and they didn’t seem OVERLY concerned but thought it would be safe to send me to a Pediatric Neurologist.

So, that’s where we ended up last Wednesday. We had 3 doctors in the room. They did the usual check of his weight and head circumference. Then they asked us one million questions. We explained that he still did the “thing” but it seems to be more often now. They poked and prodded. He giggled and babbled. They checked his reflexes, is strength, this length, his motor skills. Everything seemed fine.

Then they saw him do the “thing”. They all kind of looked at each other. They all went out to discuss the possibilities and brought in the real doctor. It was like a scene from House where the other doctors try to figure things out on their own and when they are baffled the big dawg comes in with all his expertise. Except our doctor was old. Really old. But didn’t have the cane like House, or the sarcasm. No, he was a really sweet old man and seemed to know what he was talking about.

He thinks that it just may be one of Kobi’s quirks. If so, I’m ok with that. But he did say that we have to give my son an EEG. They will hook him up to a machine that will monitor is brain waves. Scary. He said that they want to rule out any silent or mini seizures.

Yes please, let’s go ahead and rule that out. I was worried that I wouldn’t get an appointment for weeks but turns out they wanted to get him in quickly. I don’t know if I should be worried or relieved. So, either way his appointment is Wednesday. Wish us luck and perfect brain wave activity.

Also, any of you ever experience anything like this? What was the outcome?