If you all have been following my blog for a while you will know that I am not one of those moms that brought the baby home from the hospital and let them sleep in the bassinet or crib.

I am the mom that attempts the crib or bassinet but am to chicken shit to follow through.

Lael slept in the bed with me until she was 5. 5 people. Who does that? That mean that when I finally decided to break her of it (at my husbands’ request/threats) she was old enough to tell me where to shove that idea.

But I did it. She is now 7 and still bargains her way into my bed on the weekends or school holidays.

I was DETERMINED to do things the right way this time. I started off great at the hospital. I would swaddle his little ass and put him in that hard plastic bassinet. When I got him home I followed through with it. And then he realized that my bed was more comfortable. Especially if he was in my bed snuggled under my armpit.

All it took was one night of sleep and he promptly turned his nose up to the bassinet. But he was too little for the crib (in my opinion). So what did I do? I let him sleep with me every night.

Around 5 or 6 months I tried to put him in his crib. I decided to “attempt” the Cry It Out method. That was bullshit (in my opinion). I just couldn’t do it. He wasn’t happy. I wasn’t happy. It was not good, so back to my bed he came.

I decided to wait for him to get a little older. Finally at 8 months I decided to try again. He did much better. There wasn’t much of a fuss. He would sleep for about 3 hrs in there. Progress.

Initially I would put him to bed around 9:30. He would sleep until 1:00. After a few weeks I moved it to 9:00. He still slept until 1:00. Then I decided to get feisty and moved it to 8:30. He slept until 3:30. This went on for a few weeks and I was happy about the process. Of course each time he woke in the wee hours of the morning I would bring him into bed with me.

Then last month I decided that 8:00 was a better bedtime. I crossed my fingers and hoped for the best. He went down easily but still woke at 3. That is until the second night in. He slept from 8-6. Non-stop. I couldn’t believe it.

Then we enter last night. I put him down around 8:30 and then I woke at 3 and he wasn’t next to me. He was still in his crib. Knocked out. I debated on letting him continue to sleep, but my throbbing boob decided he needed to eat.

I woke him and fed him and then changed him. Just when I was going to carry him to my bed I changed my mind. I decided to put him back in his crib.

I went back to bed around 3:30 and flipped though the tv for a few minutes.

Then I woke up at 7. I had fell asleep. Wait. Did Kobi stay asleep?

Last night was the first night he did not sleep in my bed at ALL.

A girl could get used to this. 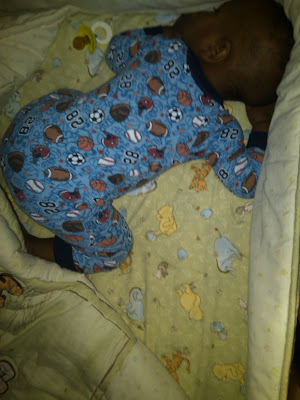 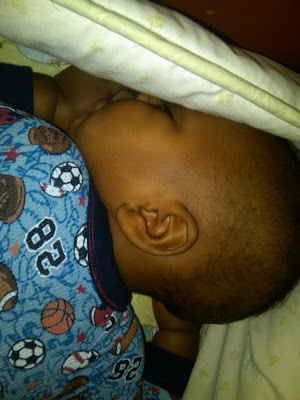 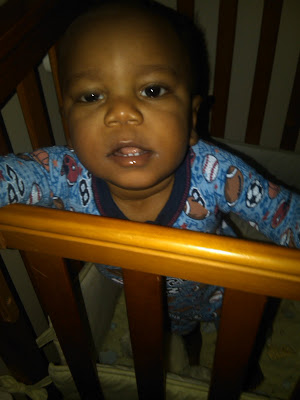