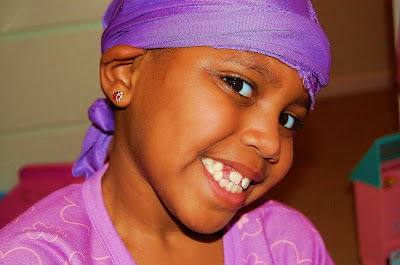 It was one of those days you pray to the gods to be over.

I got home from work and it was finally almost over.

I just had to get through helping Lael with her homework without strangling her and ignore my husband to refrain from to dispose of his remains.

It had been a while since Lael had lost a tooth and we had pretty much gotten past the tooth excitement.

What I had forgot was that this one pesky tooth has been lose for MONTHS.  It was kind of hiding behind her newly grown in "big girl" teeth and I had forgot all about it.

Until she came home yesterday saying that it was bleeding.  I wiggled it a little and could tell it only had a few days left at the most.

Well Lael showed it to me when she finished her homework and I just reached in and gave a gentle tug and out it popped.

She looks at me and said "Well, that was easy."

It was that simple.  It turned my night around.  That easily.

Isn't she precious.  Big buck teeth and all.  Well except for that scarf, let's just pretend you didn't see that.