A Father's Not Always A Dad

I have been really thinking alot about fatherhood being pregnant with my boy.

Me and hubby have got the parenting thing down for girls but now that we are going to bring a man (well not originally, but you get the point) into the world, it's important that we do it right.

There are so many men out there that father children but don't show them what it is to have a dad.

I am optimistic that my husband will do just fine.

I haven't touched on fathering much on my blog. It's been on my mind for some time now but it's a really sensitive subject with me.

I didn't grow up in a normal household. My mother married her high school sweetheart, they got married he went in the army and then I was born. I witnessed a bad marriage, abuse, drinking, and overall violence. By the time I was 6 they were divorced. We moved away with my mom and we barely saw him.

He scared me. A child should not be scared of her father. My mom remarried when I was 8. I love my step-father. He adopted me at 14. My father over-nighted the paperwork to give up his rights. It hurt me. Many nights of sitting by the window with my bags packed waiting for him to pick me and my brother up. He never came. I didn't see or hear from him from the time I was 14 until I was 25.

He looked horrible. I saw him in court with my mom. Apparently the back child support he NEVER paid had caught up to him and he didn't want to pay. He had the nerve to drag my mother to court. He cried when he saw me. He asked about my husband and daughter. I told him I forgave him and that he is the one who missed out on a great daughter. He asked about Lael and I got angry. You will never meet my child I told him. You will never have the chance to hurt hurt as deeply as you've hurt me. She deserves the world.

A few months later I ran into him on the Metro. He spotted me and said hello. I said hello back. It was awkward. He got off at his stop and handed me something. It was an old picture of me from when I was 6. He said he's always carried it with him. Sad. I've always carried him in my heart. I just wasn't enough.

I heard he's been married since him and my mom divorced. To the same lady who he had affairs with. I've heard he has a few children by her. I just hope he was a better father to them than he was to me and my brother.

I don't give my husband enough credit sometimes. He drives me nuts and hasn't always done the things I've wanted him to. But one thing I know is that he's not just Lael's father. He's her dad. He gives her kisses and hugs every night. He makes sure he records her special shows. He buys her favorite snacks. He makes sure he buys the right bandaids for her. He always makes her laugh. He's a dad. Every child deserves a dad like him and watching him father her heals my own broken heart a little everyday. 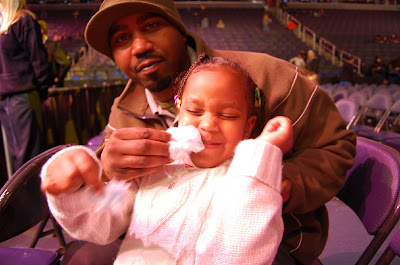 Email ThisBlogThis!Share to TwitterShare to FacebookShare to Pinterest
Labels: Fathers, My Husband