I Don't Think I'm Ready for THAT

Yesterday was beautiful.  I mean a thankgodwinterisgoingawayandspringiscoming type of beautiful.

As tired as I was from getting close to NO sleep the night before, I could resist taking Lael to the park to enjoy the warmth.

A bit after we got there the little girl that lives across the street fom us came to the park as well.

Originally the girl ran over to a group of boys and didn't see Lael. I nudged Lael to go over and say hello. (I try to get her out of the shyness)

Lael went to say hi and then the girl followed her back where they began to play together.

A few minutes later one of the little boys came up the the girl and said "So-and-so likes you."

I mean this girl JUST turned 8 and is in the 2nd grade.  Lael wasn't in earshot so didn't hear what was going on but WTF!

The girl ran over to her mother (who was on their back patio and couldn't hear it) and told her.  I'm not sure what she said to her but the girl ignored the boys and continued to play with Lael.

After a few minutes her mom called her in.  I'm not sure if it was because the boys were lingering around or because the sun was going down.

Either way, I am mortified FOR her.

Seriously.  Does this shit start in the 2nd grade?

I'm not prepared for this.  Am I going to have to talk to my 1st grader about what these boys mean.

When will she come home talking about a boy liking her?  And who will dig my grave because once again DIE is what I will do?

I don't remember having to deal with boys at least until the 4th or 5th grade.

What have yall experienced?  Any advice?  Seriously. I'm too young to die.

When I take my girl to the park I only expect to deal with this: 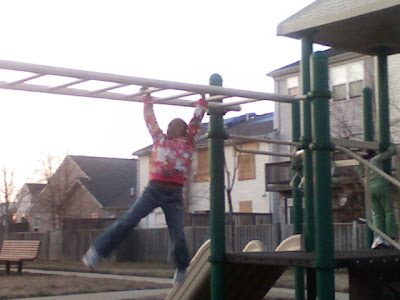