The Torn Heart Of A Child

I don't think it gets any easier as the years go by.

Being a parent is hard. Being a step-parent is worse.

I was lucky enough to be apart of D's life from the very beginning. I mean from the time she was a day old.

Hubby (boyfriend) at the time, insisted that I be there and go through this with him.

While at times I felt is was an impossible request (in addition to me being only 19!!) I soon feel into my role.

There have been MANY ups and downs over the last 8 years but they have made me stronger, my and hubbys relationship stronger, and in the end made me a better mother for Lael.

Through all the frustration, fights, tears, broken doors (don't ask), and many miles driven up an down the road, there wasn't a time when I remembered asking the child how she was doing.

She comes every other weekend. We get her every other major holiday. She has been with us the majority of the summer. All of June and mostly all of August.

I have loved it for the most part. But there are some issues that I'm sure every broken/blended family has.

I try to be understanding but there are times I lean on my friends to give me advice on how to deal with it.

I am a protective mother so when she's rude to Lael it gets right up under my skin. I fuss and punish but until last night, I never, ever, thought to sit her down and ask why.

I am ashamed to admit this. I sit Lael down often to talk about her feelings and how she should deal with situations.

I urge her to use her words and not lash out. The exact thing had have been doing all these years.

This brings me to my point.

Last night one of D's famous attitude episodes occurred and it made Lael upset.

I yelled out for her to ignore her because D was being mean and carried on.

But something tugged at my heart. Would I do the same if it were Lael? No. I would find out what was bugging her.

I called D into the room with me and asked her what was wrong. She gave me one her of famous shoulder shrugs and I felt my cheeks start to burn.

I decided I wasn't going to let that get in my way. I told her I wasn't taking her shrug as an answer. I grabbed her into my arms and explained to her that I'm her mommy too and mommies are supposed to make your problems go away and I can't make it go away if you won't tell me what it is.

She finally looked me in my eyes. My heart tugged. She grabbed my waist, pressed her head to my chest and let the tears go. She cried. I cried. There were so many things that have been left unsaid over the years.

I forget that she is almost 8. Not the kind of 8 we were when we were kids. But a new 8. You know the kind of 8 nowadays where kids are 10x's smarter than we were.

We talked for an hour. About how she feels about having 2 homes. About what her idea of a perfect home would be. About how she misses her sister when she's away.

Of course she dreams that she could have her mother and father together. What child wouldn't want that. But she also loves me and couldn't imagine life without me. She feels guilty because when she's home she wants to be with us and when she's with us she want to be home.

I can't begin to imagine what else goes through her head. I was though able to give her wise advise. You see I too came from a broken/blended family.

I explained the pros and cons. I explained that her recent rebellion at her mom's would not go unpunished at our house.

I explained that just like she has love from both families she will have consequences as well. I told her that we all loved her and that would never change.

I explained how luckier she was then some to have 2 mothers and she would always have double the love and attention.

She understood. She smiled and kissed me. She promised to talk to me whenever she was having a hard time with the situation.

I'll be here when she comes. With an open heart and an open mind.

I love you D, from the day you were born and I always will. 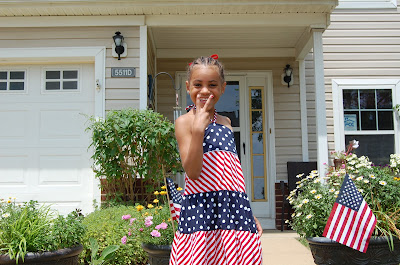