What Else Could I Have Done In 3 Days

This weekend was full. Full of all kinds of things. I am exhausted but lots of fun was had. Friday I had to leave work and pick up D from PA. My mother-in-law came along for the ride and we stopped to pick up Lael from school.
We left early enough to beat most of the traffic. We got there early as planned and went to Super Walmart to pick up chicken for my father-in-law's birthday party the next day. 150 pieces. Yes, that's a whole lot of chicken. Try being the one driving while the windows get foggy from the steam and having to roll down the window to avoid having a chicken scent overdose. That was a bit funny. I don't think I've gotten the smell out of my coat still.
We got back home around 8:45 and that was still time for me to meet up with some girlfriends for a little baking party. We had a blast! They baked, I ate and took pictures. It was nice to have girl time and especially in a beautiful home. I surely got some ideas for my plain jane house.
I don't think I got home until after midnight or close. I got a few hours of sleep but was up early to workout (yes I am back on my workout program) and they off to get my hair done for the party. Once I got back, I quickly dressed in my little black ensemble and off we went. The girls came with me and hubby met us there later. I helped my MIL get ready for the crowd and put up decorations. I was "hired" as the bartender even though I've never done it before...ever.
The girls decorated cups for tips and then were off to their bedroom away from drunk old people. The night was lots of fun but being behind a bar really gives you and idea of how much people can drink and still walk. It was amazing. Old folks can really hold their liquor! I got hit on by some old drunk men but in the end I made almost 80 bucks in tips! Whoo Hooo!

I stayed on my feet from the time I got there (5:30) until the last drunk left (2:00) and then didn't make it bed until close to 4am. Long, long night. My feet were throbbing but it was a lot of fun. Me and the girls spend the night there and got up around 9 and had breakfast with MahMah. She made us bacon and eggs, yeah, she's cool like that.

We were out of there by 11:30 with the intent on going to a Christmas party of my co-workers' but we didn't make it. I didn't realize how tired I was until I started driving. We were home a bit after noon and all I could do was crash on my futon. I slept until 2:30 and then had to be down the street for a meeting.
What meeting you may ask? Girl Scouts! Today was Lael's first Daisy meeting. I was so happy, but sleepy at the same time. She was really shy at first even though she knew most of the girls but very quickly warmed up. We set dates for our meetings, decided on the vests we would order and they began to learn the Girl Scout Promise...too cute! 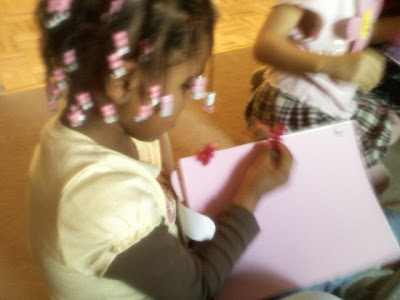 They got to put their own books together and decorate them. 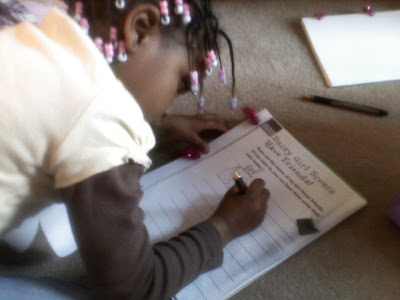 And then wrote their names and passed them around to have their friends add their names. 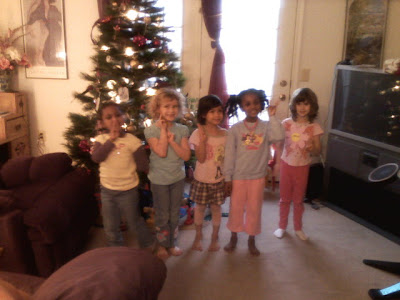 We were done with our meeting around 4:15 and I had to speed home to pick up D and be on the road at 4:30 to have her back in PA by 6. I made it, actually early and I was able to be back on the way back home by 6. On the way back the tiredness really kicked in again and I was determined to get home. Too determined I guess because I got pulled over. For speeding. How fast was I going? Ummm maybe an 8 and a 4 put together. I'm not going to tell which order. What was the speed limit? Maybe an 6 and 5 put together, again I won't tell the order. If the speed limit were 56 and I was going 48 it wouldn't have been a problem. Yeah, I got ticketed with a big fat one. $160.00. OUCH! I promise I was coming down a hill and we all know a hill can carry you down fast....yeah, yeah I know. I'm bad. But really I am really a safe driver. Really.


I crept all the way back home sulking all the while. The weekend was great but I'm glad it's over. Too much excitement for little 'ol me.