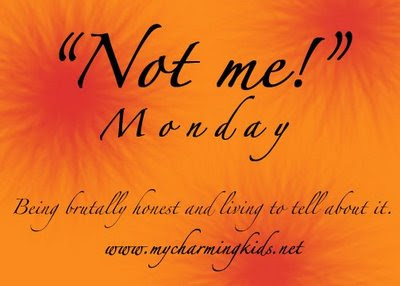 I did not realize at the end of a day last week that I had been wearing my underwear backwards the entire day. I would have noticed the uncomfortableness (is that even a word???) of that.


I did not write a post using the word "shit" more times than I should have. I would never "speak" that way.

I did not give Lael Burger King for dinner 2 nights last week. Not me the "perfect" mother.

I did not let Lael stay up a little late some nights this week just because I had worked so late and hadn't seen her all day. That would be irresponsible.

I did not, and I feel a need to repeat, DID NOT purposely bump into a guy who decided to stop walking in the middle of the sidewalk when I had just got off a 12hr shift. Only a person who has no patience for rudeness would do that.

I did not stare down a guy on the elevator at work because I wanted to test the theory that people try to avoid contact in small spaces. That would just be creepy.

I did not curse my husband out in the middle of the mall because he was being a jerk. Only a horrible wife would do that.

I did not avoid eating all day yesterday just so when I went to Baha Fresh I would be able to eat all my food. That would be greedy.

Email ThisBlogThis!Share to TwitterShare to FacebookShare to Pinterest
Labels: Not Me Monday